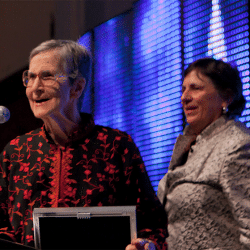 Architecture Professor at the University of Texas, Austin

Natalie Griffin de Blois (April 2, 1921 – July 22, 2013)  was a ground-breaking architect and founding member of CWA.  She was named an AIA Fellow in 1974 and was recognized with a lifetime achievement award by AIA Chicago in 2010. This award caps a fifty-year career in architecture, followed by an encore of over thirteen years spent teaching and lecturing at the University of Texas and other schools. Despite enduring years of isolation as a rare woman in a man’s profession, de Blois’ love for architecture enabled her to overlook discrimination and forge a path for generations of women architects to come.  Balancing work and family life was something de Blois just seemed to take in stride: “That was just a matter of you take a week off and go to the hospital and have a baby and come back and do your work. [laughter] That’s what I did with my other three children.”

De Blois was a professor at the University of Texas, Austin, from 1982-1994, and her studios were extremely popular with the students. Even there she found ingrained discrimination, however, particularly in the lack of parity between the compensation of male and female professors. In 1998, she received recognition for her teaching through the Romieniec Award. The Natalie de Blois Scholarship was established in her honor to support female architecture students on an annual basis. When asked what her most significant contribution to the field of architecture was she answered, “Well I think probably, it’s in being an architect who actually worked on buildings, and as a mentor for other women. I think that’s the biggest contribution I’ve made.”